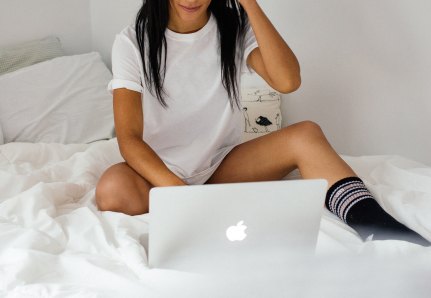 Online dating is hard. It’s weird. You create a profile, swipe left or right on someone you think is cute and/or you like what they have to say about themselves, and then you like, talk and stuff. But what do you talk about? Obviously this is going to differ for each person based on interests and likes. But generally speaking, it’s kind of awkward to try and create connection out of nothing, after never actually meeting this person face-to-face.

Speaking of which, there’s a lot that we glean from meeting someone in person. We can see their facial features for what they are – unedited and real. We hear their voice, can smell them, and see how they move. These subtle nuances that make up each and every one of us are encoded into our DNA and either makes us irresistible or completely atrocious to someone based off of their DNA, as well as general social standards.

But, since no one actually ever strikes up a conversation with someone in person now – at least not in the PNW – we’re all forced to either swipe left or right. Some of the people we may never “see” in the real world are now made visible. And that’s great, but it’s also disastrous. Our genetics tell us who we should procreate with, and our pheromones – the scent we give off – help ward off potential DNA complications, such as mating with your first cousin, brother, or sister.

However, since we’re all swiping left and right now, although we’ve become more visible to other people and have more opportunities to meet people we would otherwise never meet in our daily lives, we have to create conversation out of thin air. One of the biggest issues I have with online dating is that someone seems to tick all of my boxes based on their looks and the very short description they have about themselves, only to fail miserably at keeping up the conversation. I’m an extrovert from the Midwest, so I can literally talk to a dirty homeless man on a subway and still have a good conversation. That being said, I also probably wouldn’t strike up a conversation with him, but I think that’s my age talking now.

So what do you do when you meet someone you like but the conversation just isn’t flowing? Typically I just stop responding and see if they come back with a question, but often times they don’t. What you choose to do is on you, but here are some tips to help keep the conversation flowing if you tend to be the one who lets the conversation die off.

Look at the pictures people put on their profile. They say a picture is worth a thousand words. Look at the pictures and ask the person questions, if it’s question worthy. You can always ask them how their day is, but that can also feel a little awkward when you don’t know someone. By asking questions, you show that you’re interested in getting to know this person a little better; to know what their likes/interests/dislikes are.

Don’t just talk about yourself

You know that friend that only ever talks about themselves and never asks you any questions about you or seems to want to get to know what’s going on in your life? Yeah, we hate that “friend.” Don’t be that person. Or do, just don’t get upset if it’s hard to get and/or keep quality dates.

Don’t comment on their attractiveness – at least not right away

Anyone looking for a quality relationship doesn’t want someone to only see them for their looks. This is a huge turn-off. It’s one thing if you’ve been talking for a while and you say that you think they’re really cute, or you somehow slip in that you’re amazed that they’re still single because of how cute, sweet, and funny they are, but it’s a whole other thing to just send, “You’re hot.” UNMATCH!

If you’re too busy to ask questions, then don’t respond until you have time to be thoughtful in your responses. If they’re asking you about your hobbies, then ask them about theirs! It’s really that simple. Also – think about things that are important to you and ask them those questions. For example, if you’re really turned off by smokers, then ask them if they’re a smoker. Or, if you LOVE going to baseball games and would love your future partner to also want to go to games with you, ask them if they like baseball games. It’s not rocket science here, people. This goes for men and women alike. I once knew this girl who was spending time with a man. This man would text her and ask her questions and she just had no idea how to respond. She would give really short responses and wouldn’t add to the conversation. It ended up not working out and she’s married to someone else now who seems wonderful, but still, part of the reason why that didn’t work out could have been because she couldn’t carry a conversation with him. Then again, maybe it just wasn’t meant to be.

All too often we start dating someone just to realize that we don’t actually like something about them that we probably should have realized before…if we had really taken the time to know what we like and don’t like. And hey, no judgement – we’ve all been there. And, part of dating IS getting to know ourselves. How can we know what we don’t like if we don’t experience it first hand, right? I mean, some people are just really in-tune with that from the get-go, but most aren’t, and that’s okay. But that’s when you need to break ties as soon as you realize that you’ve found a deal breaker. That being said, try to know your deal breakers before even meeting up with someone – this will give you great questions to ask people to figure out if you even want to spend the time and money to go and meet with this person. Key point – knowing yourself helps you create content and ask valuable questions.

This is the biggest fail. I’ll be talking to a guy for weeks with good conversation, and he just never asks me out. Why are you on a dating site if you don’t actually want to meet up with someone? I’m not sure if it’s anxiety or what, but it’s annoying AF. If it is anxiety about meeting someone, you have one of three options, in my opinion:

For me, the worst thing someone can do is waste my time. If you’re not really interested in meeting up and just want someone to chat with, be upfront about it. If the person you’re talking to is genuinely interested in meeting people and making connections/friendships/something more, then either choose to at least meet up with them for coffee, or tell them what you’re looking for. The worst that’s going to happen is that you’re not going to like each other and then neither of you will waste any more time.

What do you think people could do to create more conversation when online dating?

Rachael has fifteen years of dating experience and has been mostly happily single for the last seven years. In that time, she's dated countless men and has encountered every possible dating situation you can think of, from being stood up, to people who ghost or attempt to guilt you into having sex with them, as well as *many* almost relationships. When she’s not blogging about her dating experiences, you can find her at the gym, cooking healthy meals at home, working on expanding her holistic health spa in Portland, OR, or spending time with friends. View all posts by MyUrbanDatingLife